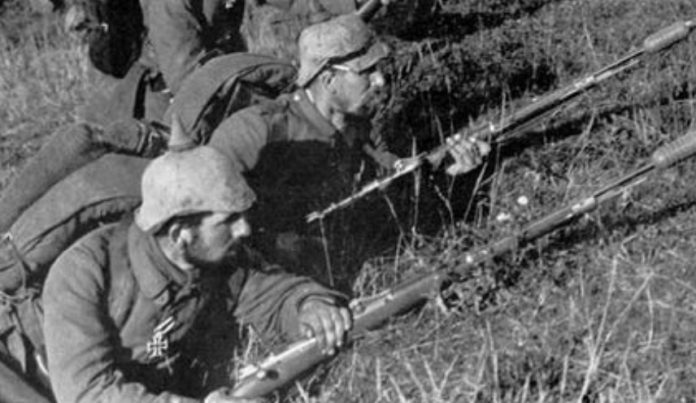 On 28 July 1914, one month to the day after Archduke Franz Ferdinand of Austria and his wife were killed by a Serbian nationalist in Sarajevo, Austria-Hungary declares war on Serbia, effectively beginning the First World War.

The First World War broke out in 1914 between the countries of the Triple Alliance (Germany, Austro-Hungary and Italy) and those of the Triple Entente (the UK, France and Russia).

The Poles found themselves in a difficult situation where two occupying forces, Germany and Austria, were on one side of the conflict while the third – Russia – on the other. None of the occupier countries planned to grant the Poles statehood rights, yet they all tried to force them to fight on their side.

On 28 July 1914. Full Russian mobilisation was announced for the 30th of July; the following day, Austria-Hungary and Germany did the same, while Germany demanded Russia demobilise within twelve hours.

When Russia failed to comply, Germany declared war on Russia on 1 August 1914 in support of Austria-Hungary, the latter following suit on 6 August 1914

The German advance into France was halted at the Battle of the Marne and by the end of 1914, the Western Front settled into a war of attrition, marked by a long series of trench lines that changed little until 1917 (the Eastern Front, by contrast, was marked by much greater exchanges of territory).

The United States initially remained neutral, though even while neutral it became an important supplier of war materiel to the Allies. Eventually, after the sinking of American merchant ships by German submarines, the declaration by Germany that its navy would resume unrestricted attacks on neutral shipping, and the revelation that Germany was trying to incite Mexico to initiate war against the United States, the U.S. declared war on Germany on 6 April 1917.

Trained American forces did not begin arriving at the front in large numbers until mid-1918, but the American Expeditionary Force ultimately reached some two million troops Though Serbia was defeated in 1915, and Romania joined the Allied Powers in 1916, only to be defeated in 1917, none of the great powers were knocked out of the war until 1918.

The 1917 February Revolution in Russia replaced the Monarchy with the Provisional Government, but continuing discontent with the cost of the war led to the October Revolution, the creation of the Soviet Socialist Republic, and the signing of the Treaty of Brest-Litovsk by the new government in March 1918, ending Russia’s involvement in the war. Germany now controlled much of eastern Europe and transferred large numbers of combat troops to the Western Front.

Using new tactics, the German March 1918 Offensive was initially successful. The Allies fell back and held. The last of the German reserves were exhausted as 10,000 fresh American troops arrived every day.

The Allies drove the Germans back in their Hundred Days Offensive, a continual series of attacks to which the Germans had no countermove. One by one, the Central Powers quit: first Bulgaria (September 29), then the Ottoman Empire (October 31) and the Austro-Hungarian Empire (November 3). With its allies defeated, revolution at home, and the military no longer willing to fight, Kaiser Wilhelm abdicated on 9November and Germany signed an armistice on 11 November 1918, ending the war.