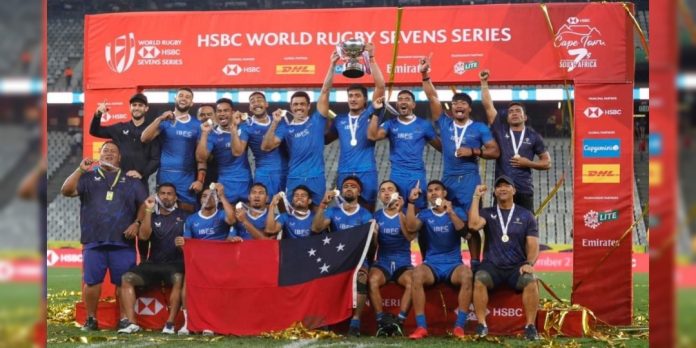 The Samoa Global News 2022 People of the Year recognises individuals and groups who have made a difference in 2022 through hard work and sacrifice. Our Editorial Board articles will be published throughout this last day of 2022, but first up is the Manu Samoa Sevens Team – the entire squad listed below and this is why…

After years of being consistently inconsistent, the 2022 IBFC powered Manu Samoa 7’s side were the epitome of consistent performance throughout year.

The MS7s made their grand return to the HSBC World Rugby 7’s Series in April 2022 during the Singapore leg of the series. It was Samoa’s first tournament since 2020, and IBFC should also be acknowledged for not backing down as major sponsors despite the lack of international matches from the team.

Muliagatele Brian Lima was appointed to take over as Head Coach of MS7s in August 2020. Immediately following his appointment, he selected Tausā Faamoe Faamaoni as his Assistant Coach and Tuala Leaega Pat Leota as his Manager.

When Limā took over from Sir Gordon Tietjens, the team hadn’t won an HSBC leg since Paris 2016 – when Damien McGrath was Head Coach and Muliagatele was his Assistant with Masunu Talapusi as Manager.

The newly appointed coach found himself starting from scratch to identify and develop a new team. An extended squad of 45 players was named. Covid hit and for almost one and a half years, players identified through regular local competition trained and trained and trained, with nowhere to go.

A Team of Debutants

When Samoa made their return to the HSBC World 7s Series in Singapore, they debuted nine new players. Only Melani Matavao, Va’afauese Apelu Maliko, Uaina Sione and Paul Scanlan had any international 7’s experience.

Since that first match in April, Samoa have debuted six more players in 2022!

An Example of Consistency

Despite playing 15 debutants this year, the Manu Samoa 7s proved to be one of the most consistent teams amongst the world squads in 2022.

Fact: Samoa qualified for the Cup Quarterfinals in every single tournament they played in 2022, despite being drawn into pools of death at times.

To put things into perspective on just how difficult it is to reach the quarterfinals, world renowned teams like the New Zealand All Blacks, Fiji, Australia, South Africa, France, Ireland, USA and Great Britain have all, at some stage this year, failed to qualify for the quarterfinal stage of a tournament.

In addition to reaching the quarterfinal stages of every tournament attended, Samoa consistently advanced to the semi-final round in six of those tournaments.

To cap off the year, the Manu 7s presented Samoa with an early Christmas present by defeating New Zealand 12-7 to become the Cape Town 7’s Champions in early December.

The reward for consistency, is that your Manu Samoa 7’s will head into the remaining eight legs of the 2022/2023 series ranked Number One on the competition table.

In just a matter of months, Muliagatele, his Management and young players re-established the team to its former glory days and reignited the People’s interest in their national rugby 7s side. From 13th place to 9th overall having played just six tournaments and Top 8 at the Rugby World Cup.

A Story of Sacrifice

This has been Samoa’s most successful year of Rugby 7’s since we won the World Series in 2010, but it has no doubt, also been the most difficult.

As fans, all we see is the 14 minutes of TV airtime for each match the Manu Samoa 7s play.

We may, at times, catch a glimpse of a pressured half-time team talk, or a post-match interview, or celebrations in the changing room. But we are rarely exposed to the sacrifices that have to be made throughout the year by players and management alike, in order to bear our country’s flag and represent Samoa on the international stage.

Often the sacrifices are only seen and carried by team members and their families.

As Samoa welcomed the New Year on the 1st of January 2022 –  the Manu Samoa 7s management and squad of 20 players left their families behind and headed to Dubai. With Covid-19 travel restrictions and border closures, the squad agreed to move away from Samoa and be based in Dubai to compete in the World Series.

The team were away from Samoa for six straight months. Away from family, friends and everything familiar to them.

The pressure mounted and a complaint letter said to have been written by players  surfaced in February 2022. Leaked to Radio Polynesia, the letter contained serious allegations towards Muliagatele and his Management. Without fact-checking or seeking clarification, the reporter and editors published the letter in verbatim.

The Samoa Rugby Union launched an investigation and an independent assessor found the letter to have been influenced by outside forces. However, by then, the Public Court of Social Media had already convicted and sentenced Muliagatele and his Management. Many jumped onto the band wagon to support the character assassination and call for termination.

Five overseas based players opted to leave Dubai and the team were given a chance to regroup and refocus. When the Manu Samoa 7s finally ran onto the world stage a few weeks later in April for the Singapore 7s, their stellar performance shocked the rugby world, and made everyone forget the fiasco, which is now a distant memory.

When the team finally returned to Samoa on the first week of June 2022, the Manu Samoa 7s would only be on island for six weeks before once again departing on a 3-month trip to compete in the Commonwealth Games, the Rugby World Cup 7’s and the last leg of the 2021/22 series in Los Angeles. 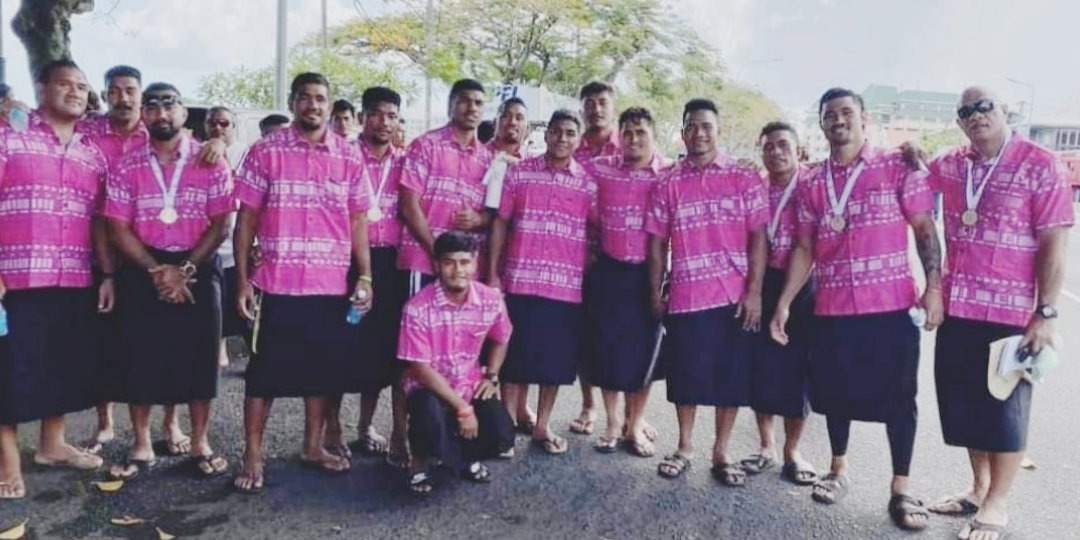 The Manu Samoa 7s returned in mid September, but there would be no rest for them, as the 2022/23 World Sevens Series launched in Hong Kong on the 4th of November. After six weeks to re-set their Strategic Plan, refocus mentally and intense physical training, the team were off to launch the new season in Hong Kong. They returned for a short two weeks before heading back out to Dubai, and of course, the Cape Town leg before the year’s end.

While overseas, team members of the Manu Samoa 7s lost loved ones, and missed out on burials and funerals for their parents and siblings. Those who are fathers missed out on children’s birthdays, and special moments of their children’s development. As a young team, some players had to celebrate their 21st birthdays away from family.

It is noted here that the remuneration for team members is hardly aligned with the intense year-round HSBC World Sevens Series Calendar.  The weekly wages hardly makes up for the months away from home, the minimum of 10 trainings per week, the ongoing physical assessments and testing, and the risk of injury carried by players week in, week out.

When the squad left for Dubai and South Africa, Melani Matavao had to sit those two tournaments out because by November, Samoa’s most senior Co-Captain had already suffered five concussions.

Malo Luteru lost his father in May 2022. He had just arrived in Dubai as injury cover. Maro would return home to his father’s grave by their home in Uafato Fagaloa. The 20-year-old insisted that his father takes all his jerseys with him and vouched to earn more in honour of his memory.

Assistant Coach Tausa Faamaoni Lalomilo lost his sister in April 2022. Only two years apart, it was the sibling Tausa had called his pele – Leaia Lalomilo Galu Frost passed away just one week after her 54th birthday.  The team were in between tournaments and he could not return home to say farewell. Also during this year while the team were away, Tausā lost his father-in-law whom he was very close to.

Muliagatele Brian Lima spent his 50th birthday in Dubai away from family, and missed out on his eldest son’s university graduation in September. The team were playing the Rugby World Cup that weekend.

Being away for months, many of the young players celebrated a birthday while overaseas, including Neueli Leitufia, Malo Luteru and Motu Opetai who all celebrated their 21st birthdays on tour.

Another area of sacrifice we pause to mention are those imposed on players and management by the inherent lack of resources in the MS7s team compared to other international sides. At tournaments, Samoa carries only five Management – Head Coach, Assistant Coach, Manager and Analyst from Samoa with a Physio who joins from overseas. Other teams in the World Series carry management teams of 7 upwards, with some sides having more management than there are players.

This means Samoa’s Analyst, for example, is helping the Manager to set up gear, run water, send messages during matches etc. By comparison, other Analysts are focused on one role. It means the Assistant Coach is also the Mental Health Therapist dealing with player issues, and the Head Coach is also the Trainer running warm-up and blow-out sessions. It means the Manager is not only dealing with logistics, he is also looking for sponsorship opportunities for the team.

And so, as 2022 comes to a close, we salute the ever-so-humble Manu Samoa 7s team – players and management – and wish them well for the remaining eight legs of the World Series. It has been a pleasure to report your 2022 journey, and we look forward to what the New Year brings.