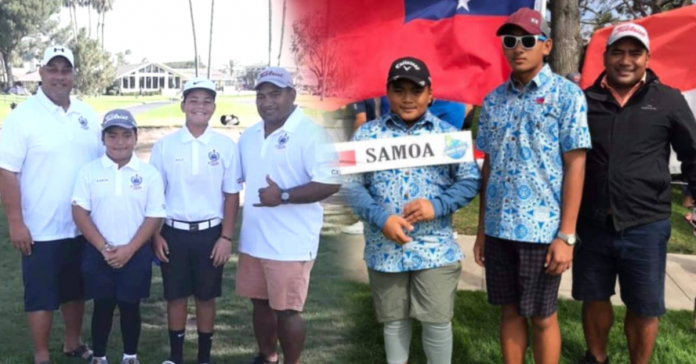 13 July 2019,  San Diego California. While the hype of the XVI Pacific Games continues in Samoa, three young Samoan golfers are in California to play in the  2019 IMG Junior World Golf Championship.

Samoa’s Junior Golfers Kilo Brown, Aaron Evalu and Tile Evalu flew the Samoan flag at the IMG Junior World Gold championship as part of the Samoa Golf development program, and have come away with scores to be proud of at the end of the 3-day tournament. 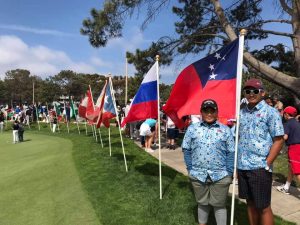 The IMG Academy Junior World Golf Championships is the largest well- known junior golf international event in the World. Founded in 1968 (475 juniors participated in its inaugural year representing 7 countries and 20 US states). Today, it has grown to 1200 participants representing 56 countries and 42 states. It is one of the major junior golf tournaments where Tiger Woods, Tony Finau and other successful professional golfers in the PGA Tour have played and won.

Junior golf development in Samoa is parent-driven and self-financed with the assistance of 1 or 2 fundraising activities throughout the year to assist the players.

The boys are primarily coached by their parents and Coach/Dad Leapai Richard Brown says that Samoa’s Junior Golf Program has come a long way in recent years.

“Our junior golfers trained and developed in Samoa are starting to play competitively and doing well in international events we hope will inspire other Samoan juniors and their parents to join,” said Leapai.

The coordination of spots and representation by the junior players at the IMG Junior World Championship event is currently organised and facilitated by the Samoa Junior Golf World Tour Committee, an informal committee led by golfer Van Wright, set up to facilitate the participation of Samoa Junior players at the IMG Academy Junior World Championship tour held annually in San Diego, USA.

The Committee mostly driven by parents of the young players also seek to maximise the participation of the youngsters to all other international golf events that have world ranking. 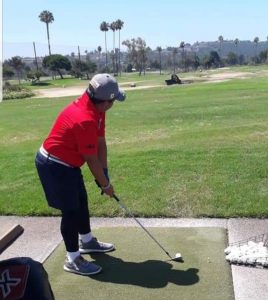 Coach/Dad Tumua Ioane Evalu added that participation at high-level competition is crucial for the advancement of Junior Golf Players.

“This event and what it means for our junior golfers who are out on the golf course every day practising to improve their game, is a dream come true;

“They get to travel to the USA to play, compete and most importantly meet and learn from other elite junior players representing their own countries and are undergoing the same junior development process,” said Tumua.

Tumua added that a other important part of participating in such international tournaments is to promote opportunities for our Junior golfers in education.

“Van Wright, Niko Vui, Aileen and Leleaga Meredith all received full ride golf scholarships to attend college in the USA as part of this program”.

Tumua acknowledged the support of everyone who has contributed to make this dream a reality for the boys.

The Utah Islander Golf Association (UIGA) and Spitwedge from Salt Lake, Utah have been sponsoring the junior golfers playing uniforms since 2018.

“We thank God for this opportunity, we also acknowledge the support and assistance provided by our local community throughout the year;

“The participation of our Samoan based junior golfers for the second time this year at the IMG Junior World Championship is an indication of their commitment and passion to improve their game; compete with the best junior golfers from all over the world and most importantly to represent Samoa with pride,” added Tumua.

In the past, Samoa Junior Golfers secured spots to play in the IMG Junior Worlds through American Samoa. Our juniors who represented American Samoa in the past include Van Wright, Niko Vui, Aileen Meredith, Leleaga Meredith, Olive Tapu and Lio Vui.

In 2018, Samoa’s juniors were able to secure their own spots to compete at this world event. Our junior players who represented Samoa for the first time in 2018 are Kilo Brown, Aaron Evalu, Faith Vui, Lio Vui and Greg Atapana.

The Samoa Junior Golf World Tour Committee would like to thank family, friends, supporters and sponsors who made this year’s participation possible.