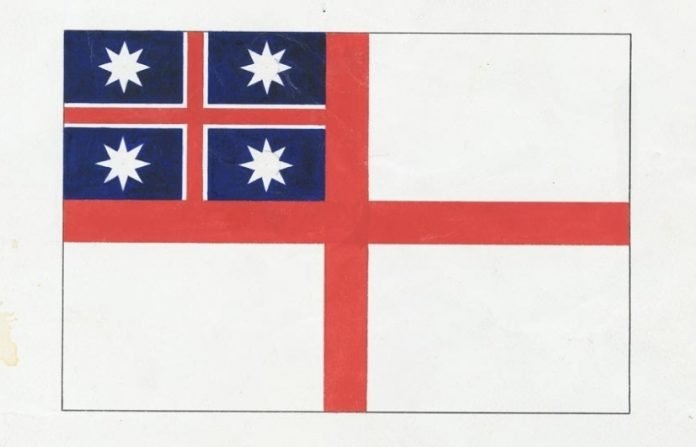 New Zealand’s first official flag was the flag of the United Tribes. It was selected on 20 March 1834 by 25 chiefs from the Far North who, with their followers, had gathered at Waitangi in the Bay of Islands. Missionaries, settlers and the commanders of 13 ships were also present.

The official British Resident, James Busby, made a speech and then asked each chief to come forward in turn and select a flag from three possibilities. The son of one of the chiefs recorded the votes. A flag based on the St George’s cross that was already used by the Church Missionary Society is said to have received 12 votes, the other designs 10 and 3. Busby declared the chosen flag the national flag of New Zealand and had it hoisted on a flagpole to a 21-gun salute from HMS Alligator.

A New Zealand flag was first suggested in 1830 after Sydney customs officials seized a Hokianga-built ship.

Australia was subject to British navigation laws, under which ships had to carry official certificates. As New Zealand was not a British colony, New Zealand-built ships could not sail under a British flag or register. Without this, they and their cargoes would continue to be seized.

So in 1833 James Busby suggested the adoption of a New Zealand flag. This would both solve the shipping problem and encourage Māori chiefs to work together as an embryonic collective government. Church Missionary Society (CMS) missionary Henry Williams arranged for three alternative designs to be made up in Sydney.

Their preferred design – the CMS flag – which incorporated the flag of the Anglican diocese of New South Wales into the Royal Navy’s white ensign. Busby mm