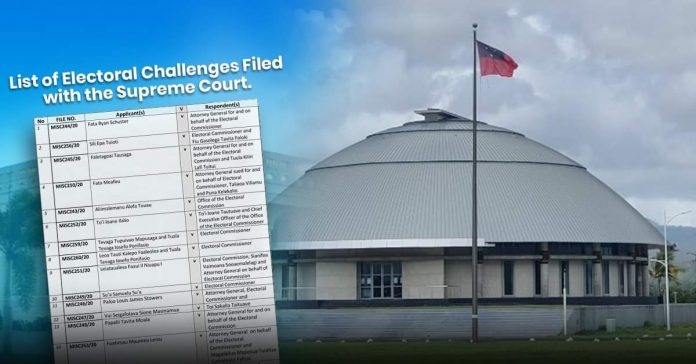 30 October 2020 Apia Samoa. The Chief Executive Officer of the Ministry of Justice and Courts Administration Susuga Moliei Simi-Vaai in an email to the media has confirmed that, “At 12 noon 30 October 2020 the Court received 20 notices of motion or petitions relating to candidate eligibility for the April 2021 General Elections.

Amongst the list of applicants is Minister of Finance Sili Epa Tuioti bringing a case against businessman Fiu Gasologa Tavita Foloki and the Electoral Commissioner.

Fiu Gasologa is one of three candidates from the village of Salelologa approved by the Electoral Commissioner to contest the seat for Faasaleleaga#1 currently held by the Minister of Finance. Fiu Gasologa was a notable member of the Minister’s campaign supporters in the lead up to the 2016 general election.

Another notable applicant is the Associate Minister for the Ministry of Commerce, Industry & Labour and Ministry of Public Enterprises; Tuifaasisina Misa Lisati Leleisiuao Palemene with a challenge against his younger brother, Aiolupotea Toni Leleisiuao.

Tuifaasisina is also challenging the eligibility of another registered candidate, Mataafa Fonofaavae Mataafa.

Chair of the Parliamentary Finance and Expenditure Committee, Aliimalemanu Alofa Tuuau is challenging the eligibility of Lafaitele Patrick Leiataualesa; one of three registered candidates for Alataua Sisifo.

Lafaitele was an Associate Minister during the 2011-2016 parliamentary term. He lost his seat to Aliimalemanu Alofa in the 2016 general elections.

When candidate registrations closed last Friday, two candidates had registered to run against Prime Minister Tuilaepa Sailele Malielegaoi from the constituency of Lepa. At the close of candidate petitions today, however, one candidate is suing the other.

Faletagoai Tausaga is challenging the eligibility of Tuula Kiliri Lafi Tuitui, who has made several unsuccessful attempts in previous elections, to run against the Samoa Prime Minister.

There are four petitioners from the Faatuatua i Le Atua Samoa ua Tasi – FAST political party. All four face issues with the requirement that a Government Village Representative (Sui o le Nuu or Sui Tamaitai o le Nuu) must sign an oath to verify a candidate’s monotaga service.

FAST member Panoa Papalii Tavita Moala continues to fight for his right to stand in the 2021 general elections and compete the Sagaga#1 seat held by current Minister of Education Sports and Culture Loau Keneti Sio; while Paloa Louis Stowers is fighting for the chance to contest the Faleata#3 seat held by Associate Minister Lealailepule Rimoni Aiafi.

Facing the same dilemma from the village of Afega is successful businessman and former Manager of the Manu Samoa Fata Ryan Schuster, who has been serving his village since he was 18 years old, leading the aumaga until he was himself bestowed a title in 2014.

The MJCA CEO has also confirmed that “all petitions will be heard and determined before the Supreme Court within 20 working days from today“. 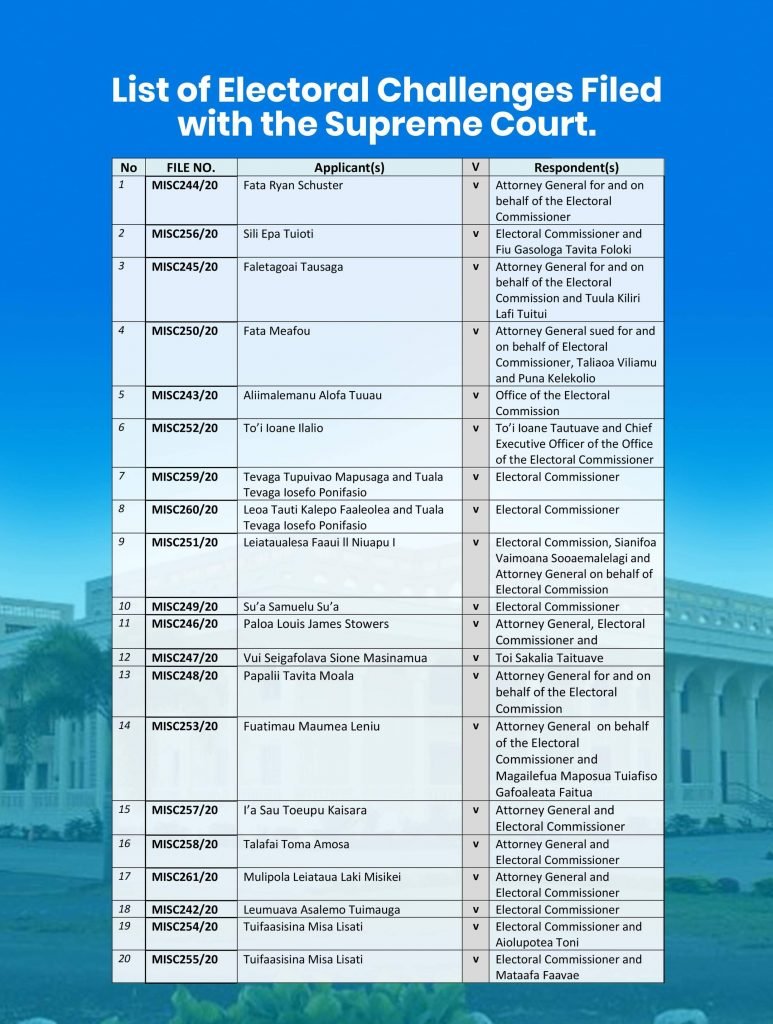