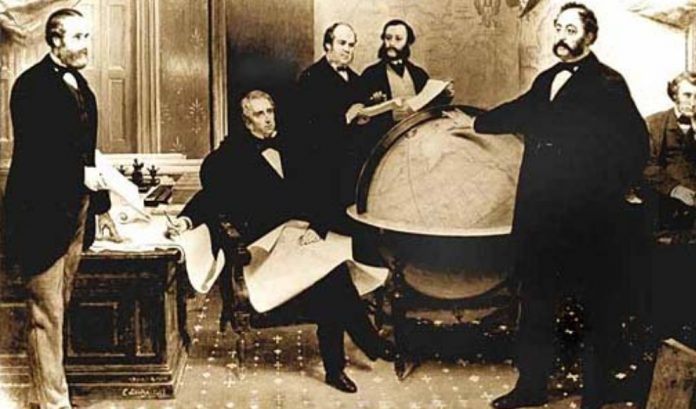 On October 18, 1867, the U.S. formally takes possession of Alaska after purchasing the territory from Russia for $7.2 million, or less than two cents an acre.

Indigenous peoples settled the unforgiving territory thousands of years earlier. The Alaska purchase comprised 586,412 square miles, about twice the size of Texas, and was championed by William Henry Seward, the enthusiastically expansionist secretary of state under President Andrew Johnson.

Russia wanted to sell its Alaska territory, which was remote and difficult to defend, to the U.S. rather than risk losing it in battle.

Negotiations between Seward (1801-1872) and the Russian minister to the U.S., Eduard de Stoeckl, began in March 1867. However, the American public believed the land to be barren and worthless and dubbed the purchase “Seward’s Folly” and “Andrew Johnson’s Polar Bear Garden,” among other derogatory names.

Why the Purchase was far from “folly”

Public opinion of the purchase turned more favorable when gold was discovered in a tributary of Alaska’s Klondike River in 1896, sparking a gold rush.

Alaska became the 49th state on January 3, 1959, and is now recognized for its vast natural resources.

Today, 25 percent of America’s oil and over 50 percent of its seafood come from Alaska. It is also the largest state in area, about one-fifth the size of the lower 48 states combined, though it remains sparsely populated.

The name Alaska is derived from the Aleut word alyeska, which means “great land.”

Alaska has two official state holidays to commemorate its origins: Seward’s Day, observed the last Monday in March, celebrates the March 30, 1867, signing of the land treaty between the U.S. and Russia, and Alaska Day, observed every October 18, marks the anniversary of the formal land transfer.