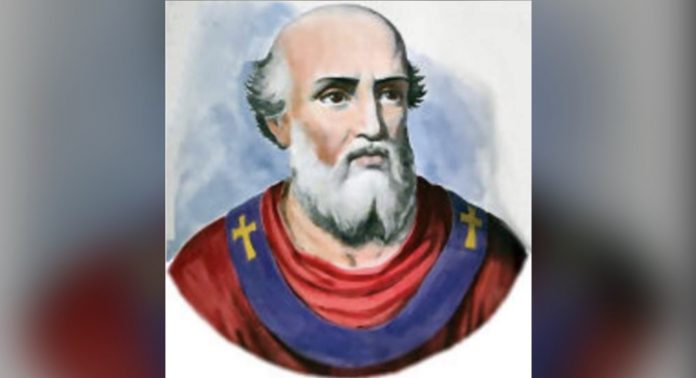 18 May 056: Pope John I Born in Tuscany, Italy in the late fifth century; he died in captivity at Ravenna on this day in 526. He was a conciliator and peacemaker, the first bishop of Rome to visit Constantinople. John was imprisoned by Theodoric, ruler of Italy and an Arian, for excessive sympathy toward the Church of the East.

The son of Constantius, he was an archdeacon in Rome for several years before being elected Pope on the death of Pope St. Hormisdas 1 in 523. He was a friend and confidant of the philosopher Boethius. The main event of his pontificate was his journey to Constantinople to try to negotiate between the Emperor Justin and the Arian Gothic king in Ravenna, Theodoric.

King Theoderic threatened that if John should fail in his mission, there would be reprisals against the non-Arian Christians in the West. John proceeded to Constantinople with a considerable entourage: including his fellow bishops Ecclesius of Ravenna, Eusebius of Fanum Fortunae, and Sabinus of Campania. His secular companions were the senators Flavius Theodorus, Inportunus, and the Patrician Agapitus.

Emperor Justin is recorded as receiving John honorably and promised to do everything the embassy asked of him, with the exception that those converting from Arianism to Catholicism would not be “restored” (i.e., allowed to retain their place in the Catholic hierarchy as deacons, priests, or bishops). Although John was successful in his mission, when he returned to Ravenna, Theoderic’s capital in Italy, Theoderic had John arrested on the suspicion of having conspired with Emperor Justin. John was imprisoned at Ravenna, where he died of neglect and ill treatment. His body was transported to Rome and buried in the Basilica of St. Peter.