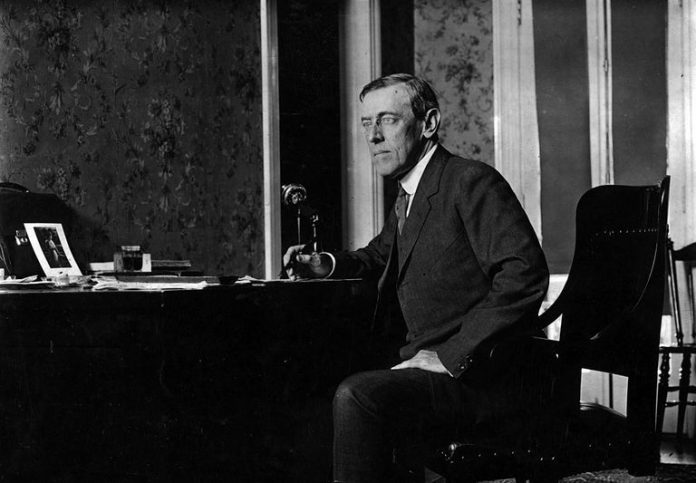 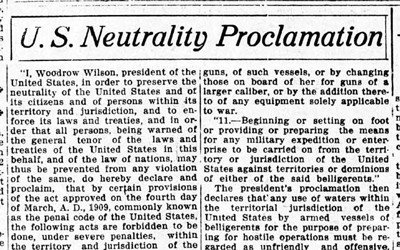 On August 18, 1914, President Woodrow Wilson issued his Proclamation of Neutrality, aimed at keeping the United States out of World War I, saying, “The United States must be neutral in fact as well as in name during these days that are to try men’s souls.”

On August 18, 1914, President Woodrow Wilson issued his Proclamation of Neutrality, aimed at keeping the United States out of World War I, saying, “The United States must be neutral in fact as well as in name during these days that are to try men’s souls.”

In 1587, Virginia Dare became the first child of English parents to be born in present-day America, on what is now Roanoke Island in North Carolina. (However, the Roanoke colony ended up mysteriously disappearing.)

In 1862, Dakota Indians began an uprising in Minnesota (the revolt was crushed by U.S. forces some six weeks later).

In 1920, the 19th Amendment to the Constitution, guaranteeing all American women’s right to vote, was ratified as Tennessee became the 36th state to approve it.

In 1954, during the Eisenhower administration, Assistant Secretary of Labor James Ernest Wilkins became the first black official to attend a meeting of the president’s Cabinet as he sat in for Labor Secretary James P. Mitchell.

In 1963, James Meredith became the first black student to graduate from the University of Mississippi.

In 1969, the Woodstock Music and Art Fair in Bethel, New York, wound to a close after three nights with a mid-morning set by Jimi Hendrix.

In 1983, Hurricane Alicia slammed into the Texas coast, leaving 21 dead and causing more than a billion dollars’ worth of damage. The Kansas City Royals defeated the New York Yankees, 5-4, in the completion of the “pine-tar” game in just 12 minutes.

In 1988, Vice President George H.W. Bush accepted the presidential nomination of his party at the Republican National Convention in New Orleans.

Five years ago: Egyptian President Hosni Mubarak, during his first visit to Washington in five years, offered lavish praise for President Barack Obama; for his part, Obama spoke of an “extraordinary opportunity” for making peace in the Middle East. Ohio executed Jason Getsy, a murder-for-hire triggerman, for killing the mother of his intended target, who survived the attack. Robert Novak, the combative TV and newspaper pundit, died in Washington, D.C., at 78. Former South Korean President and Nobel Peace laureate Kim Dae-jung died in Seoul.

Thought for Today: “The self-hatred that destroys is the waste of unfulfilled promise.” – Moss Hart, American playwright and director (1904-1961).