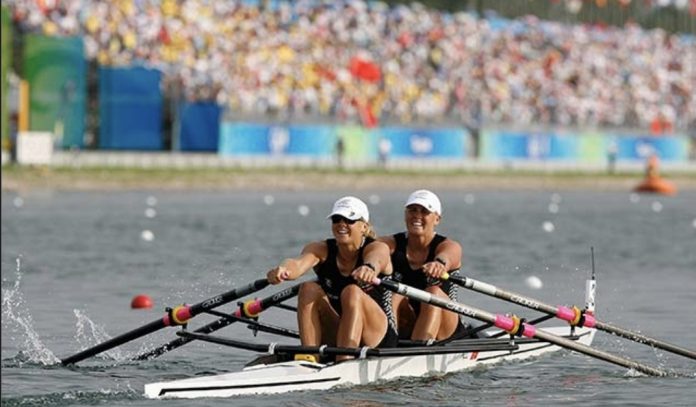 16 August 2008: Evers-Swindell twins win gold in back to back Olympics for the double sculls event.

While Kiwis had high expectations of their rowing squad at the Beijing Olympics, few expected identical twins Caroline and Georgina Evers-Swindell to successfully defend the double sculls title they had won in Athens in 2004.

No duo had ever won this event twice at the Olympics. The Evers-Swindells’ career seemed to have peaked with the third world championship title they won in 2005 at Gifu, Japan. While they won bronze and then silver at the 2006 and 2007 worlds, by 2008 they were struggling to make the A finals (top six) at major European regattas. Victory in their heat at Beijing brought renewed hope.

Television viewers watching the final cheered as the Evers-Swindells launched a withering finishing burst, then groaned as they apparently just failed to catch the German scullers. The British were also within centimetres and commentator Peter Montgomery called the New Zealanders in third. By next morning, he had re-recorded his commentary – the Kiwis had won gold by 1/100th of a second.