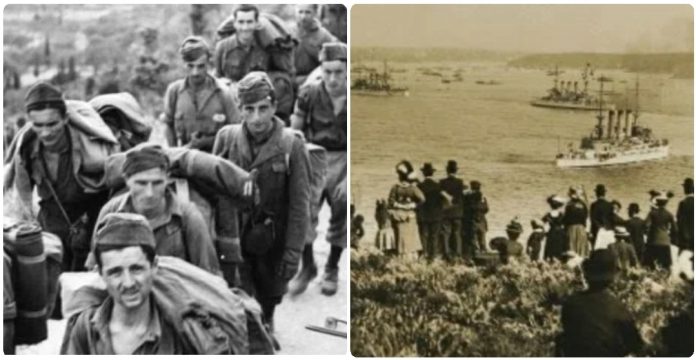 On October 13, 1943, the government of Italy declares war on its former Axis partner Germany and joins the battle on the side of the allies with Mussolini deposed from power and the collapse of the fascist government.

MESSAGE FROM MARSHAL PIETRO BADOGLIO TO THE COMMANDER-IN-CHIEF OF THE ALLIED FORCES (GENERAL D. D. EISENHOWER), COMMUNICATING ITALY’s DECLARATION OF WAR AGAINST GERMANY,

I take great pleasure in informing you that His Majesty the King of Italy has declared war on Germany. The declaration will be handed by our Ambassador in Madrid to the German Ambassador, at 3 o’clock P.M. (Greenwich time) on October thirteenth, By this act all ties with the dreadful past are broken and my Government will be proud to be able to march with you on to the inevitable victory. Will you be good enough, my dear General, to communicate the foregoing to the Anglo-American, Russian and other United Nations Governments. I should also be grateful to you if you would be kind enough to inform the Italian Embassies in Ankara, in Buenos Aires, and the Legations in Bern, Stockholm, Dublin and Lisbon.

PROCLAMATION BY MARSHAL BADOGLIO TO THE ITALIAN PEOPLE, OCTOBER 13, 1943

Italians, with the declaration made September 8th, 1943, the Government headed by me, in announcing that the Commander-in-Chief of the Anglo-American Forces in the Mediterranean had accepted the Armistice requested by us, ordered the Italian troops to remain with their arms at rest but prepared to repel any act of violence directed at them from whatever other source it might come. With a synchronized action, which clearly reversed an order previously given by some high authority, German troops compelled some of our units to disarm, while, in most cases, they proceeded to a decisive attack against our troops. But German arrogance and ferocity did not stop here. We had already seen some examples of their behavior in the abuses of power, robbery, and violence of all kinds perpetrated in Catania while they were still our allies. Even more savage incidents against our unarmed populations took place in Calabria, in the Puglie and in the area of Salerno. But where the ferocity of the enemy surpassed every limit of the human imagination was at Naples. The heroic population of that city, which for weeks suffered every form of torment, strongly cooperated with the Anglo-American troops in putting the hated Germans to flight. Italians! There will not be peace in Italy as long as a single German remains upon our soil. Shoulder to shoulder we must march forward with our friends of the United States, of Great Britain, of Russia, and of all the other United Nations. Wherever Italian troops may be, in the Balkans, Yugoslavia, Albania, and in Greece, they have witnessed similar acts of aggression and cruelty and they must fight against the Germans to the last man. The Government headed by me will shortly be completed. In order that it may constitute a true expression of democratic government in Italy, the representatives of every political party will be asked to participate. The present arrangement will in no way impair the untrammelled right of the people of Italy to c hoose their own form of democratic government when peace is restored. Italians! I inform you that His Majesty the King has given me the task of announcing today, the thirteenth day of October, the Declaration of War against Germany.

JOINT STATEMENT OF THE PRESIDENT (ROOSEVELT), THE PRIME MINISTER OF ThE UNITED KINGDOM (CHURCHILL), AND THE PREMIER OF THE SOVIET UNION (STALIN) CONCERNING DECLARATION OF WAR BY ITALY AGAINST GERMANY, OCTOBER 13, 1943.

The Governments of Great Britain, the United States and the Soviet Union acknowledge the position of the Royal Italian Government as stated by Marshal Badoglia and accept the active cooperation of the Italian nation and armed forces as a co-belligerent in the war against Germany. The military events since September eighth and the brutal maltreatment by the Germans of the Italian population, culminating in the Italian declaration of war against Germany have in fact made Italy a co-belligerent and the American, British and Soviet Governments will continue to work with the Italian Government on that basis. The three Governments acknowledge the Italian Government’s pledge to submit to the will of the Italian people after the Germans have been driven from Italy, and it is understood that nothing can detract from the absolute and untrammelled right of the people of Italy by constitutional means to decide on the democratic form of government they will eventually have.