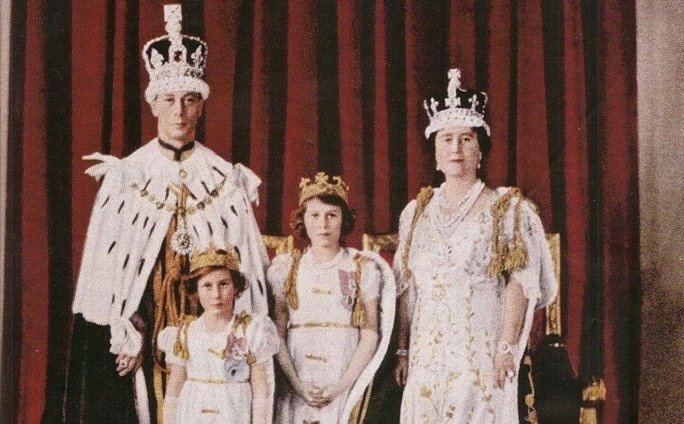 The coronation of George VI  and his wife Elizabeth as king and queen of the United Kingdom and the Dominions of the British Commonwealth took place at Westminster Abbey, London, on May 12, 1937.

George VI ascended the throne upon the abdication of his brother, Edward VIII, on 11 December 1936, three days before his 41st birthday. Edward’s coronation had been planned for May 12th and it was decided to continue with his brother and sister-in-law’s coronation on the same date.

King George VI and Queen Elizabeth had two daughters Elizabeth II who is now the Queen of England and Princess Margaret who passed away on February 9, 2002.

Before the King and Queen got married, Elizabeth rejected his proposal twice in 1921 and 1922, reportedly because she was reluctant to make the sacrifices necessary to become a member of the royal family. After a protracted courtship she agreed to marry King George.The King and Queen were married in the same place the coronation was held, at Westminster Abbey.

The event was designed to be not only a sacred anointing and formal crowning, but also a public spectacle, which was also planned as a display of the British Empire. May 1937 included a program of royal events lasting nearly the entire month to commemorate and mark the occasion.

The media played an important part in broadcasting this show of pageantry and imperialism to the Empire. The coronation was an important event in the history of television being the country’s first major outside broadcast, although television cameras were not allowed inside the abbey. It was also the first coronation to be filmed, as well as the first to be broadcast on radio.